The CDC defines suicide as “Death caused by self-directed injurious behavior with an intent to die as a result of the behavior.”

The operative word here is “intent.” If someone does something that is risky and dangerous, like drink and drive or take drugs and they die, it will be ruled an accidental death unless there is some evidence that they intended to die as a result of what they did.

There are many situations such as single car accidents with fatalities where there is suspicion of suicide, but because the intent to die was never communicated, it will be ruled accidental. This also can help us understand by behaviors like cutting are called non-suicidal self-injury. Most of the time the self-injury is done with the intention of relieving some type of psychological pain – not dying. There is concern however, that people who cut on multiple occasions lower their threshold for lethal self-injury. In other words, the more they get used to injuring themselves, the easier it might be to fatally injure themselves.

Another definition is sometimes helpful: “Suicide is an attempt to solve a problem of intense emotional pain with impaired problem-solving skills.” This definition captures what is happening to someone who is suicidal: they are experiencing a problem or series of problems which are causing great psychological pain.

For example, if you think about a time in your life when you felt overwhelmed by what you considered to be a terrible problem, you can probably remember that your problem-solving was not at its best. Most suicidal people, including youth, do initially try to figure out how to cope with their problems. When the initial solution does not work and now problems get piled on, their coping skills start to diminish. Usually there is some type of triggering event that pushes them over the edge.

Understanding suicide from this behavioral perspective can help us appreciate that for most people, the decision to take their life is at the end of a process that has. Been going on for a while. While the final act of suicide may be impulsive, the thought process leading up to it is not. There is a time to intervene and perhaps prevent the suicide if we know what to look for and how important it is to get them help. 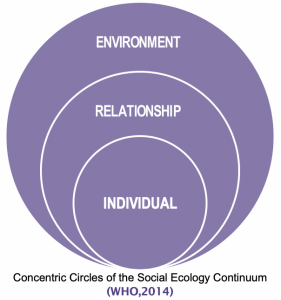 This continuum starts at the individual level, encompassing a person’s biology, psychology, and social history. Risk factors on this level include depression, impulsive, or aggressive responses to stress, poor coping skills, substance use, problem gambling, and prior experiences with death and trauma.

Risk is also influenced by a person’s relationships with family, peers, and mentors. These relationship factors include experiences such as interpersonal violence, abuse or sexual assault, bullying, family separations, the loss of an important friend or family member, no access and/or lack of engagement with mentors, or having those close to you not recognize or be aware of your help-seeking attempts/signals.

On the continuum are cultural/environmental factors, including the perception of social acceptability of suicide in popular culture or among a peer group, codes of silence that discourage reaching out to adults for assistance, having access to the means to kill oneself, poor coordination of services, limited access to care, or a lack of social connectedness. The work of prevention is to identify and implement interventions that decrease risk factors or increase protective factors at varying points along the social ecology. 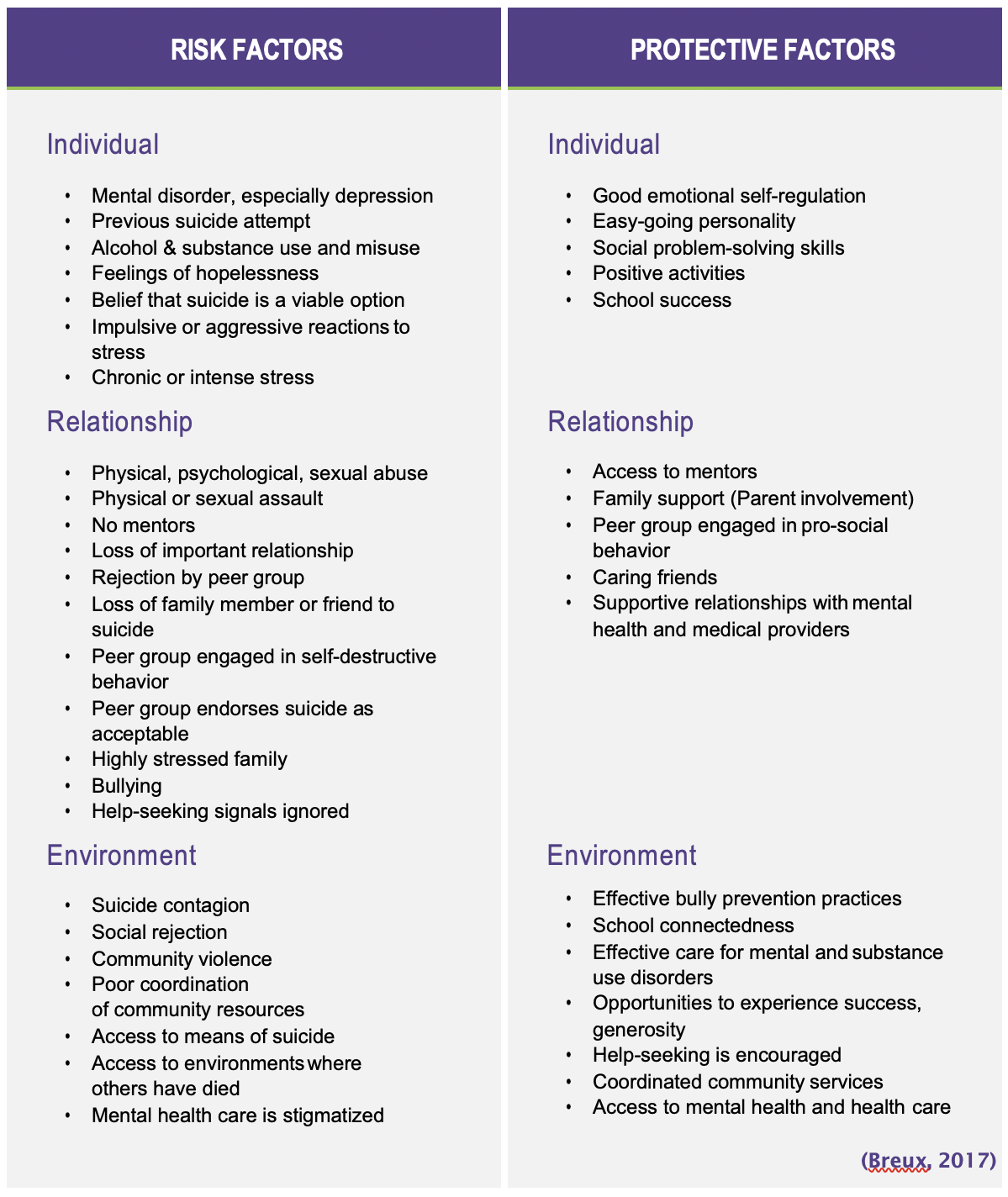 It is important to remember that most risk factors are common, and in and of themselves are no more predictive of a suicide than risk factors for heart disease predict heart attacks. Risk factors are simply predictors of potential risk, but a percentage of students exhibiting risk factors may start to exhibit suicide warning signs.

Stressful life events or situations can serve as triggering events for suicidal behavior. For young people, these precipitants may include events like getting in a fight with a friend or family member, getting in trouble at school, a bullying incident, family separation, illness or death in the family, or loss of a friend or opportunity. Real or perceived losses, and upcoming events for which a student feels unprepared and overwhelmed, can also be precipitating events. When stressful life events are coupled with multiple or significant risk factors, it is important that school staff can recognize warning signs for suicide. Warning signs are observable signals that tell us to stop and pay immediate attention to a particular student because they may be at risk for imminent suicidal behavior. The word FACTS serves as a helpful acronym for identifying the most commonly recognized warning signs of suicide.

F is for FEELINGS. Hopelessness, worthlessness, despair about the future, or excessive worry.

A denotes ACTIONS. Actions include trying to gain access to a gun or pills, behaving recklessly or increasing alcohol or drug use. Actions can also include showing aggressive behavior that is inconsistent with the student’s previous demeanor, self-harming behaviors, or being involved in bullying or looking online for ways to die.

C indicates CHANGES. This is a very important category because it means we are looking for changes from the student’s previous attitude, moods, or behaviors which have been noticeable for at least a couple of weeks. For example, students who were active may become withdrawn, quit athletic teams, stop paying attention to personal appearance, daydream or even fall asleep in the classroom. It would be impossible to list all the potential behaviors you might  see, so simply concentrating on recognition of changes from previous behaviors is a real key to making assessments in this category.

T represents the THREATS that some students make or hint at. These can be specific statements of intent like “I’m done with living” or “I’m thinking of killing myself” or worrisome innuendos in writing or other class assignments like “People would be better off without me”. Threats may also be posted on social media sites. Whether specific or vague, threats tell us the student is thinking about death or suicide, and this escalates the level of concern.

S refers to SITUATIONS that may serve as triggers for the suicide. These include getting into trouble at home, in school, or with legal authorities; personal losses in relationships, opportunities, or even losses of less tangible things like self-esteem  or hopes for the future. Life changes for which the student feels overwhelmed or unprepared such as moving or the transition after high school graduation can also serve as triggers. The most worrisome time is between the occurrence of the triggering situation and its resolution—in that period of uncertainly before the outcome is known (SPC-NY, 2019).

*This version of FACTS is taken from Suicide Safety for Teachers and School Staff, Lifelines Prevention, and Act on FACTS: Making Educators Partners in Youth Suicide Prevention.