Tier II interventions include selective strategies targeting (1) groups who may be at higher risk, and (2) those experiencing stressful life events that may put them at elevated risk. Below, are some, but not all groups that research has demonstrated have a higher risk of suicide (King, 2013). In discussing groups that may be at higher risk, it is important to question what it is about being in that group, that might lead to increased risk. It is these circumstances for which school health and mental health professionals including school psychologists, social workers, school counselors, nurses, or on-site community mental health providers can then consider appropriate interventions.

While the characteristics that define a student as a member of a higher risk group might be a fixed fact and may or may not be alterable, a focus on stressful life events provides a slightly different lens. If we recognize that the anticipation and aftermath of a stressful life event, particularly those that represent a meaningful loss to the individual, can be a critical time for suicide risk, we can preemptively intervene with supports and consider opportunities for screening and recognizing warning signs of suicide.

Students identifying as lesbian, gay or bisexual may be 4 to 5 times more vulnerable to suicide risk than their heterosexual peers. Lesbian, gay or bisexual youth are also more likely to experience discrimination, bullying, violence, and victimization. However, victimization alone does not explain the elevated risk (Robinson, 2012). The risk for attempts in this group is significantly lessened if the student is in a supportive social environment (Hatzenbuehler, 2011). A student who feels they can talk about their problems to just one school staff member is 30% less likely to report making multiple suicide attempts than youth who do not have a safe adult to talk to, highlighting the importance of training school staff to support LGBTQ youth with sensitivity and cultural competence (AFSP, 2019).

Transgender adolescents and gender non-conforming adolescents as a demographic group experience high rates of suicide attempts (Becerra-Culqui, 2018). It is recommended that school personnel be educated about the risk and that social supports are critically important. Because harassment, discrimination, and victimization are implicated in elevated suicide risk for this group, it is critical that schools have policies in place that create safe and supportive school environments. In July of 2015, NYSED published Guidance to School Districts for Creating a Safe and Supportive School Environment for Transgender, and Gender Nonconforming Students.

The Trevor Project is a national resource that offers online learning modules as a teacher resource for middle schools and high school classrooms. They also offer 24-hour crisis support via text, chat, and phone for LGBTQ youth experiencing emotional distress.

The relationship between non-suicidal self-injury (NSSI) and suicide is complex. Research demonstrates that non-suicidal self-injury is an important risk factor for a suicide attempt (Klonsky, 2014). Additionally, a previous suicide attempt is an important risk factor for death by suicide. Both risk factors can be viewed as indications of emotional pain and increased capability to engage in self-harm that may lead to death.

Emotional dysregulation related to a chronic or situational stressor, or a child’s vulnerability to distress can lead to maladaptive behavior patterns in certain vulnerable children. Essential life skills for such students include: 1) Awareness, understanding, and acceptance of emotions, 2) Ability to engage in goal- directed behaviors and inhibit impulsive behaviors when experiencing negative emotions, 3) Use of situationally appropriate strategies to modulate the intensity or duration of emotional responses rather than eliminating emotions entirely and 4) Willingness to experience negative emotions as part of pursuing meaningful activities.

DBT in Schools is a promising program. It is an adaptation of an effective therapeutic clinical intervention Dialectical Behavior Therapy (DBT) that has been proven to decrease suicidal behavior and suicidal ideation. It includes lesson plans for classroom social/emotional skills development (Dadd, 2016).

Youth with Mental Health and/or Substance Use Disorders (SUD)

Mental health conditions: depression, attention- deficit hyperactivity disorder, eating disorders, intermittent explosive disorder, and conduct disorder are important risk factors for suicidal behavior among young people. An estimated one in five children have a diagnosable mental disorder that can result in significant impairment; therefore, school staff may play a pivotal role in recognizing and referring the student to treatment that may reduce risk and improve longer- term outcomes.

Suicide is the leading cause of death among those with substance use disorders and 20% of suicide deaths involve alcohol. Acute alcohol intoxication is present in 30 to 40% of all suicide attempts. The disinhibition that is associated with alcohol consumption is one factor. When a student with suicide risk is also using alcohol, there should be increased concern for the possibility of a suicide attempt (SAMHSA, 2016).

Screening, Brief Intervention, Referral to Treatment (SBIRT) is a framework that takes a comprehensive approach to address substance use. Many local prevention providers across New York can partner with schools to offer this evidence-based practice.

The NYS Office of Alcohol and Substance Abuse Services (OASAS) offers a Directory of local Substance Use Prevention Programs. Teen Intervene is a brief early intervention program for purchase for students ages 12- to 19-years who display mild to moderate problems associated with alcohol or drug use. 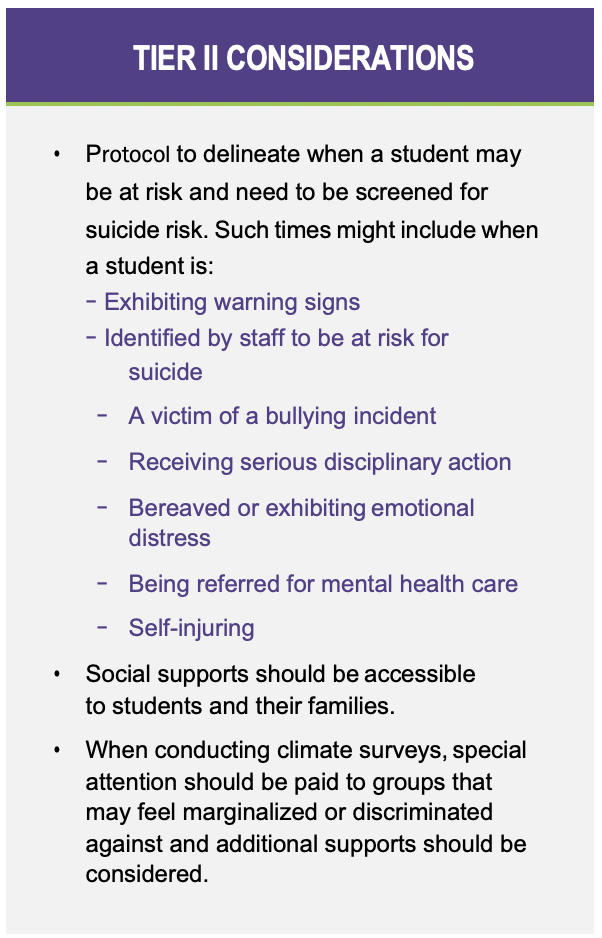